The air has gotten cooler and clearer.  The sunshine is no longer oppressive.  The sky has darkened slightly.  Summer is scootching over and making room for autumn.

I love Kenneth Grahame’s The Wind in the Willows always, but certain chapters stick out to me at different times.  The chapter for this time of year is called “Wayfarers All”, when all the birds are getting ready to migrate for the winter.  This is the beginning:  “The Water Rat was restless, and he did not exactly know why.  To all appearances the summer’s pomp was still at fullest height, and rowans were reddening, and the woods were dashed here and there with a tawny fierceness, yet light and warmth and colour were still present in undiminished measure, clean of any chilly premonition of the passing year.  But the constant chorus of the orchards and hedges had shrunk to a casual evensong from a few yet unwearied performers; the robin was beginning to assert himself once more; and there was a feeling in the air of change and departure.”

That’s it.  Nothing looks very different, but everything feels different.  Summer is beautiful, but summer doesn’t make me want to run away and explore and change and have adventures.  To use another Wind in the Willows quote, autumn fills me with a “spirit of divine discontent” and that’s where I am right now.  Ready to drop everything and run away. 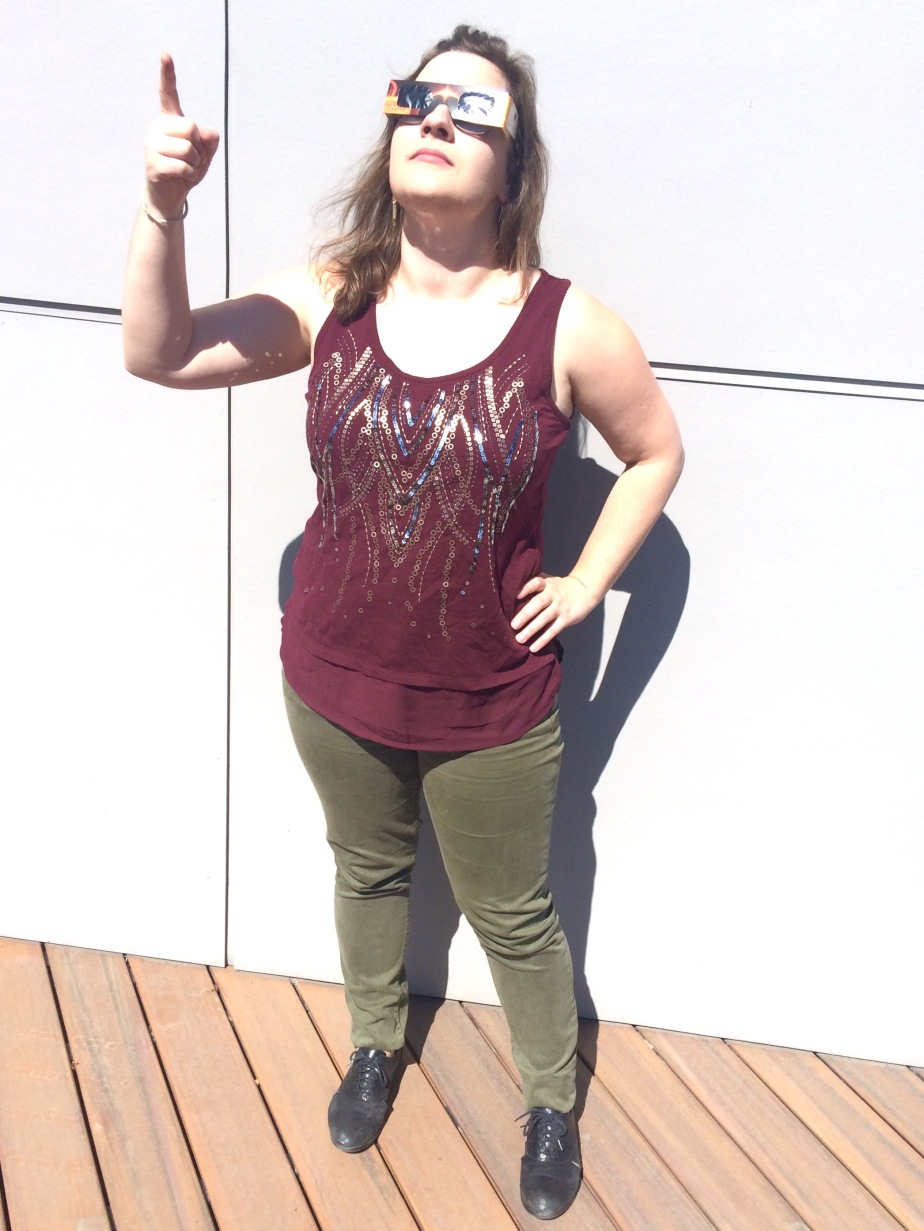 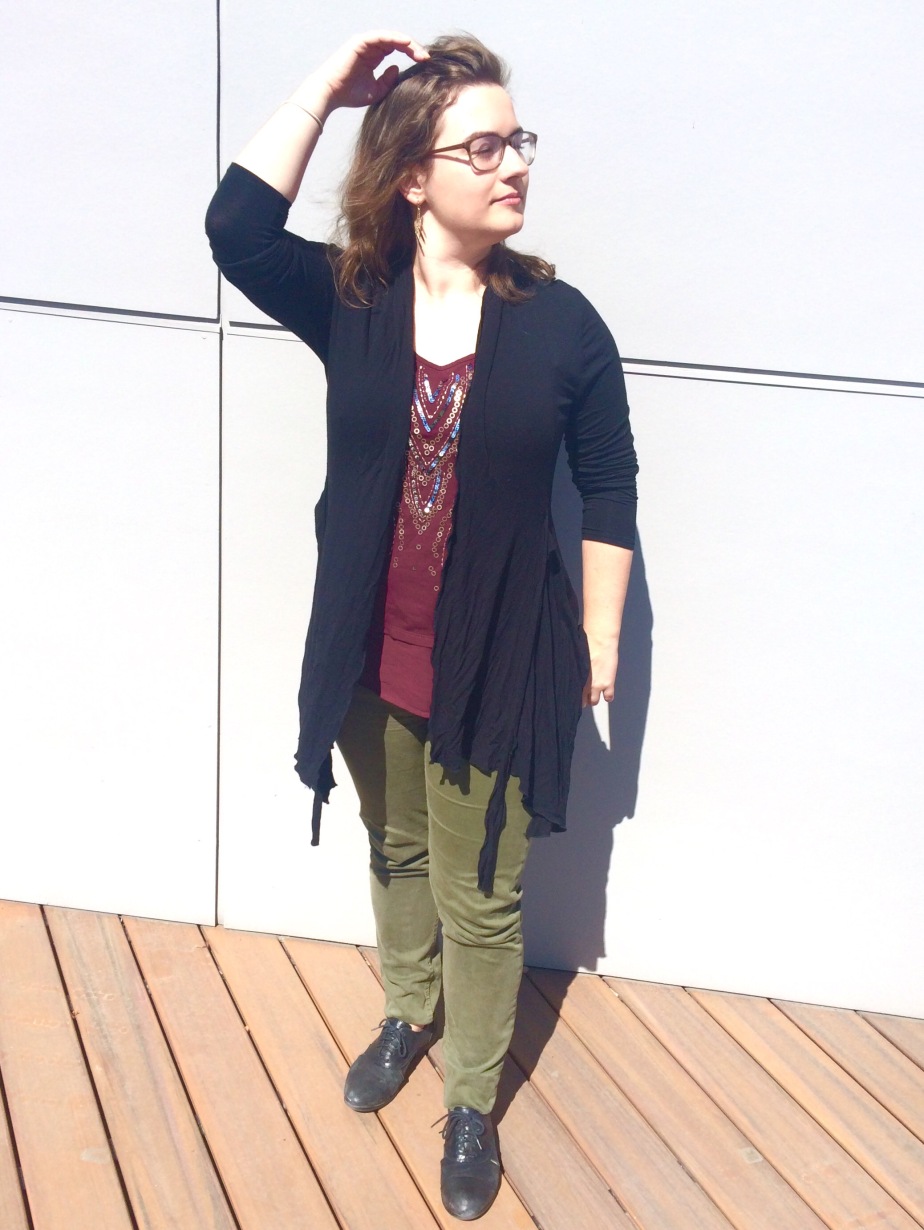 This week started with an eclipse – how amazing is THAT?  I didn’t experience the total eclipse, but the moon covered around 94% of the sun.  The light dimmed darker and darker and the air went cold and the ambient noise died down.  I don’t pay attention to the tiny insect clicks and bird coughs until they stop.  It moved me.  Our planet relies on a fireball that is 93,000,000 miles away.  We are so fragile, yet so self-important.  That’s what I loved about the eclipse.  We aren’t awestruck as often as we should be.  It’s good to feel very small and very finite.  Pride does not become us.  Humility makes mankind more beautiful.

That being said, I don’t think this is a very successful outfit.  But I enjoyed the sequins on the shirt, because I’m like a magpie.  I like shiny things.  The cardigan and oxford shoes made me feel like a character in a steampunk adventure.  Am I a drama queen?  Maybe a tad… 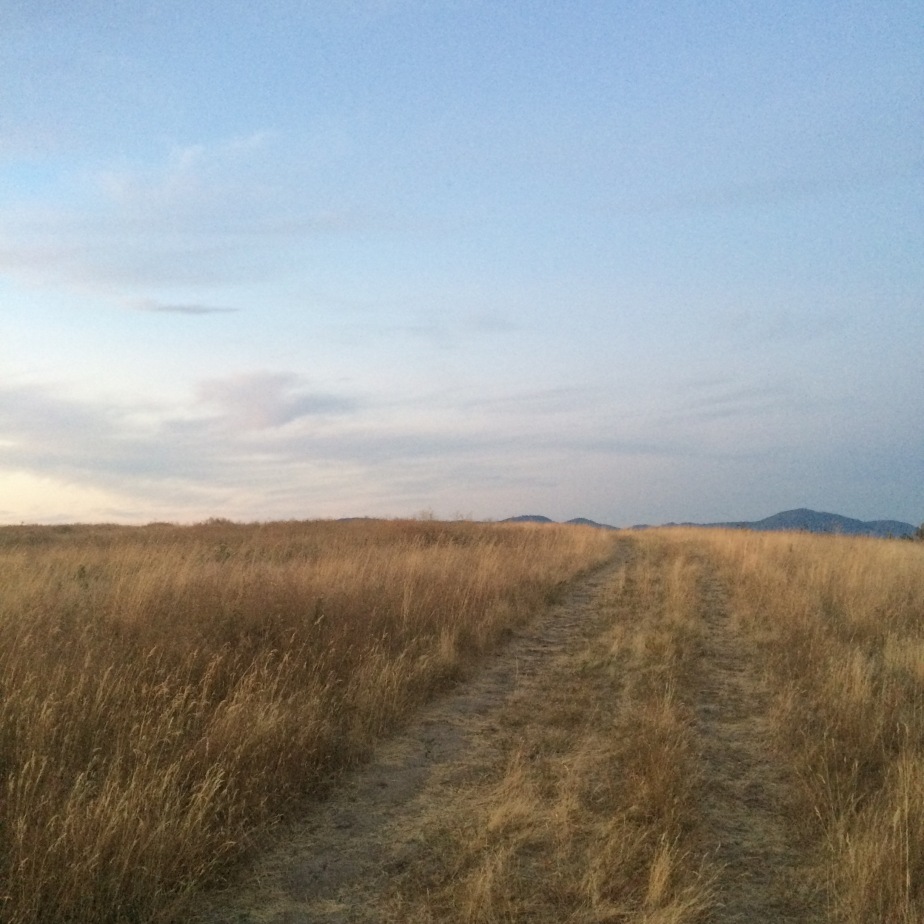 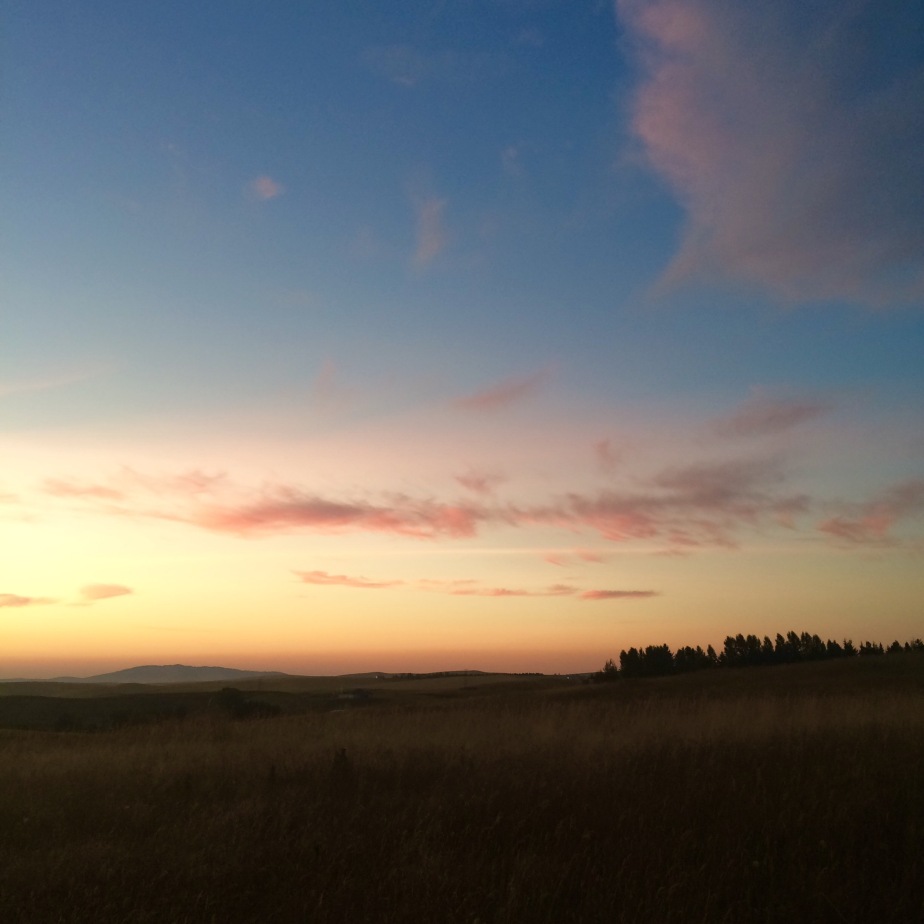 I spent that evening with friends.  We sat on top of a dry hill, surrounded by insect hums and dry grass cracklings.  The sun went down and sucked all the color towards itself, until it sputtered on the skyline like a barely functional neon sign.  The air smelled like change and movement.  The neon sun eventually went out entirely and the colors dispersed.  Stars pricked through the fabric of the sky.  Quietness and an open sky are good for me.  It’s easy to lose perspective and get caught up in my tiny comings and goings and my own story. 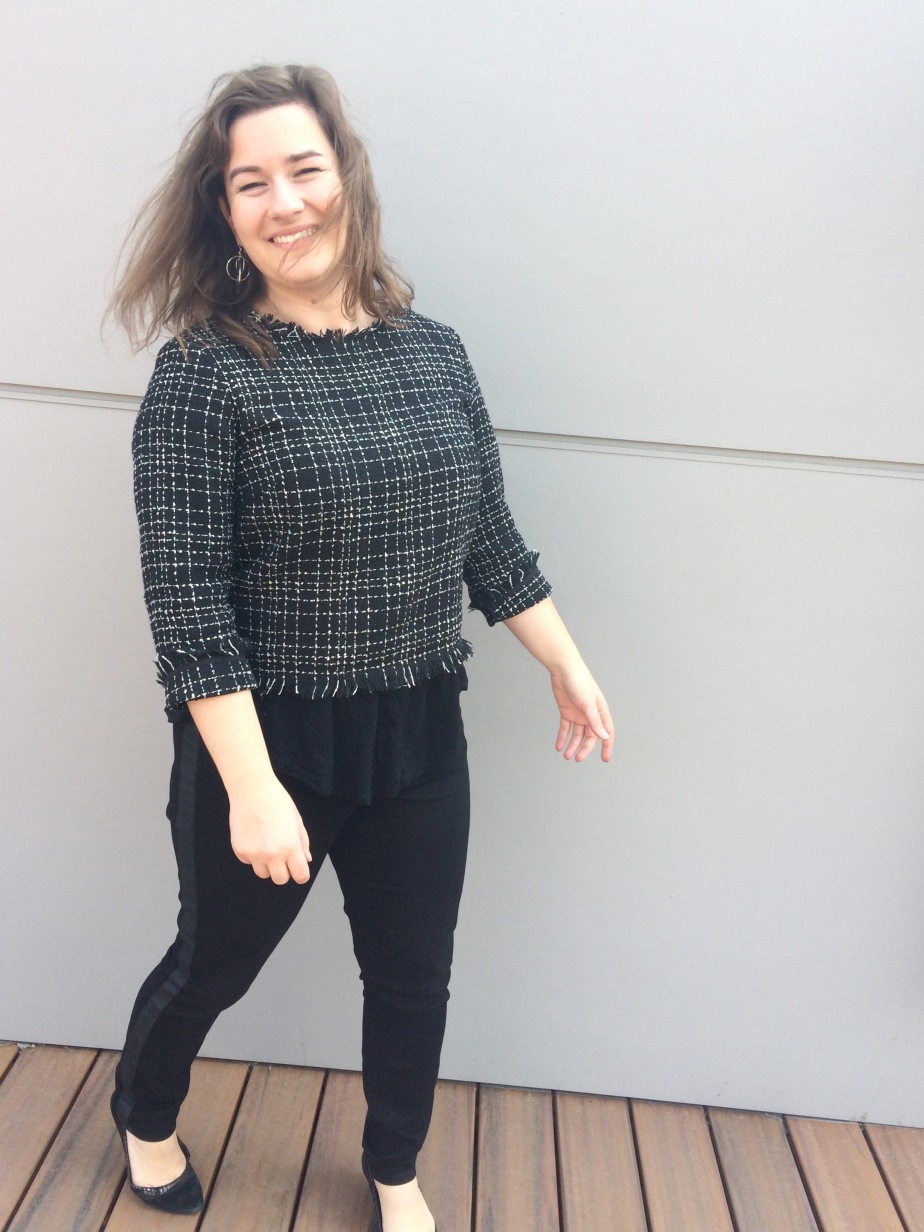 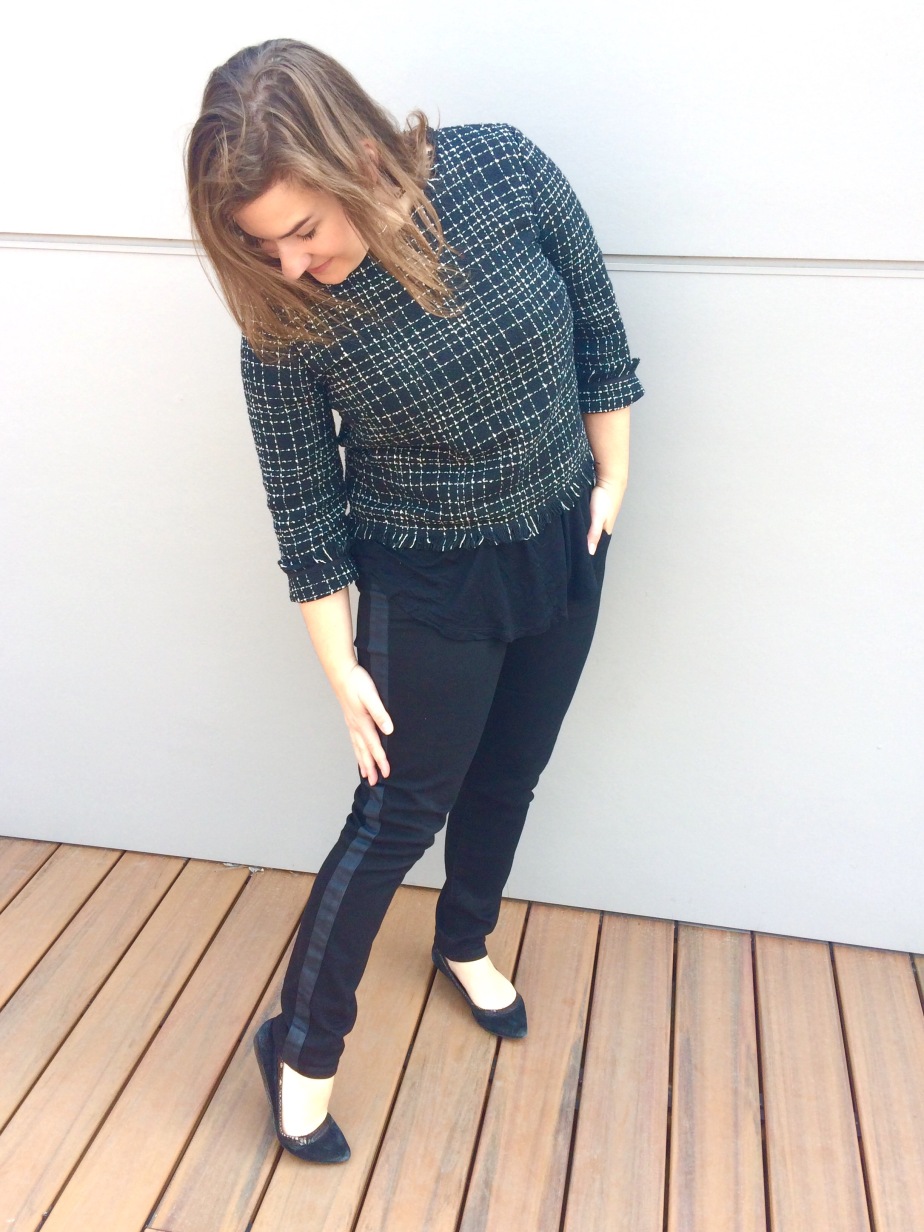 I like this outfit.  These pants are simple black jeans, but some kind designer added a tuxedo stripe to the side.  That makes them so much cooler.  They’re like dressy Han Solo pants now.  Black ballet flats and a tweedy top layered over a longer black t-shirt.  It looked dressy without trying too hard.

Since I’ve been in Change Everything mode, I made a haircut appointment.  I love haircuts.  I’ve never had a haircut I didn’t like.  It’s possible that OTHER people didn’t like them, but I liked all of them….

I like to feel cute BEFORE I get the haircut (makeup done, a good outfit, etc.), because that really makes the haircut look even better.  I never want to leave the salon still feeling like the Before in a Before and After comparison in an advertisement.  I want to look like the After picture.

Have you noticed how EVERYTHING changes in the After picture?  There’s always the thing the ad wants to highlight (usually dramatic weight loss), but the Before picture is taken in the least flattering clothes and the least flattering light, from the absolute worst angle.  The After picture has the same woman at a great angle, immaculate hair and makeup and a killer outfit, standing in the glow of perfect lighting.  It’s usually because we want everything to change when we change one thing about ourselves.  Sometimes we want a change, but we have remember that one change doesn’t change everything.  This isn’t Roman Holiday.  But haircuts are lovely.  I highly recommend them. 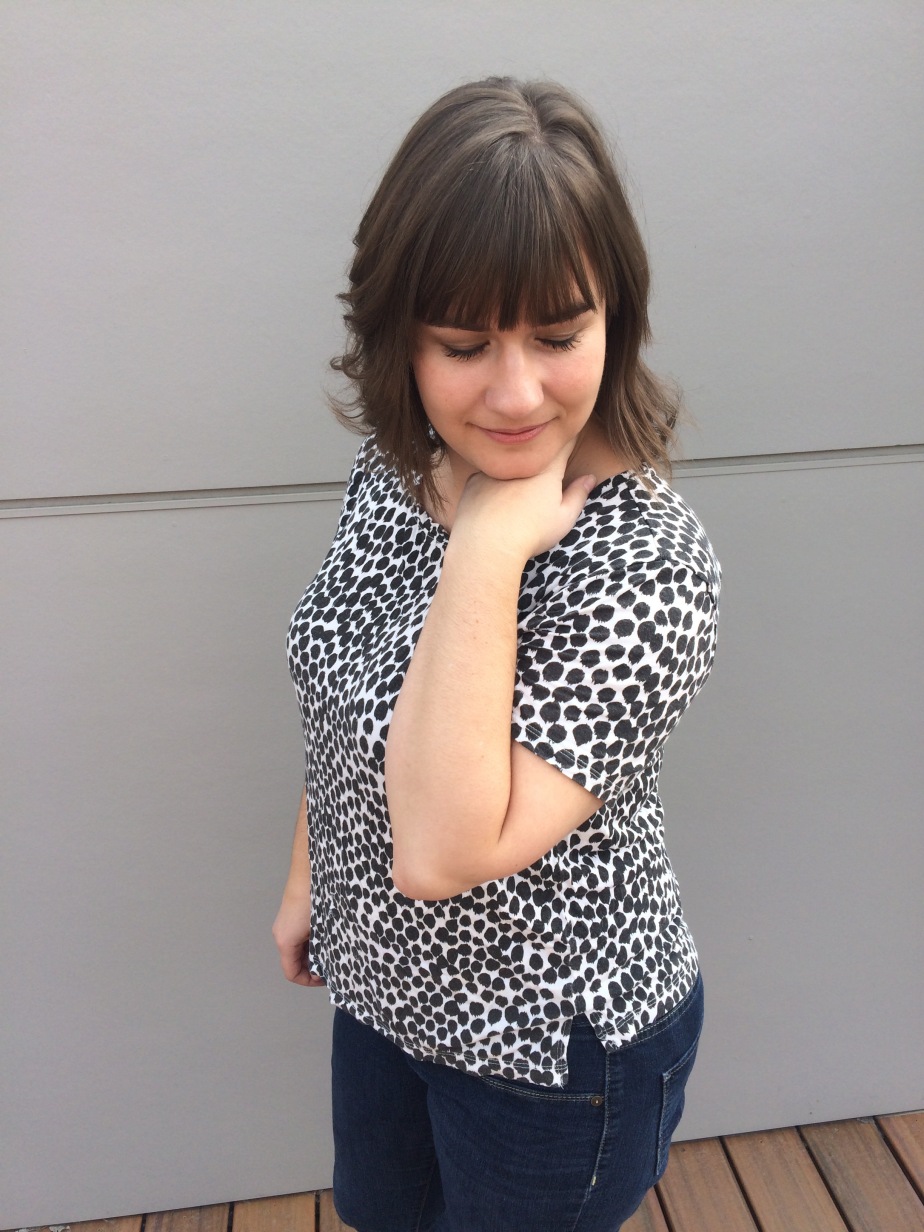 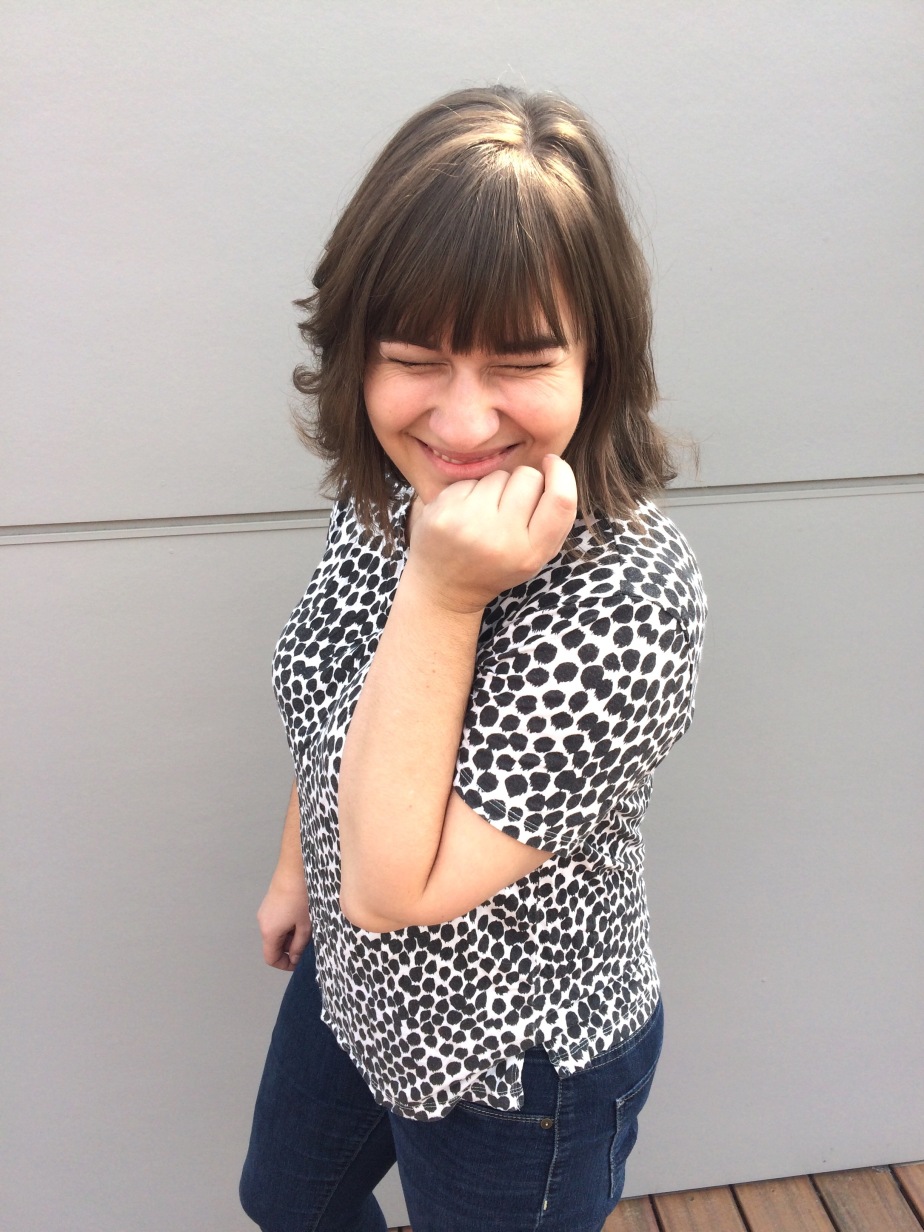 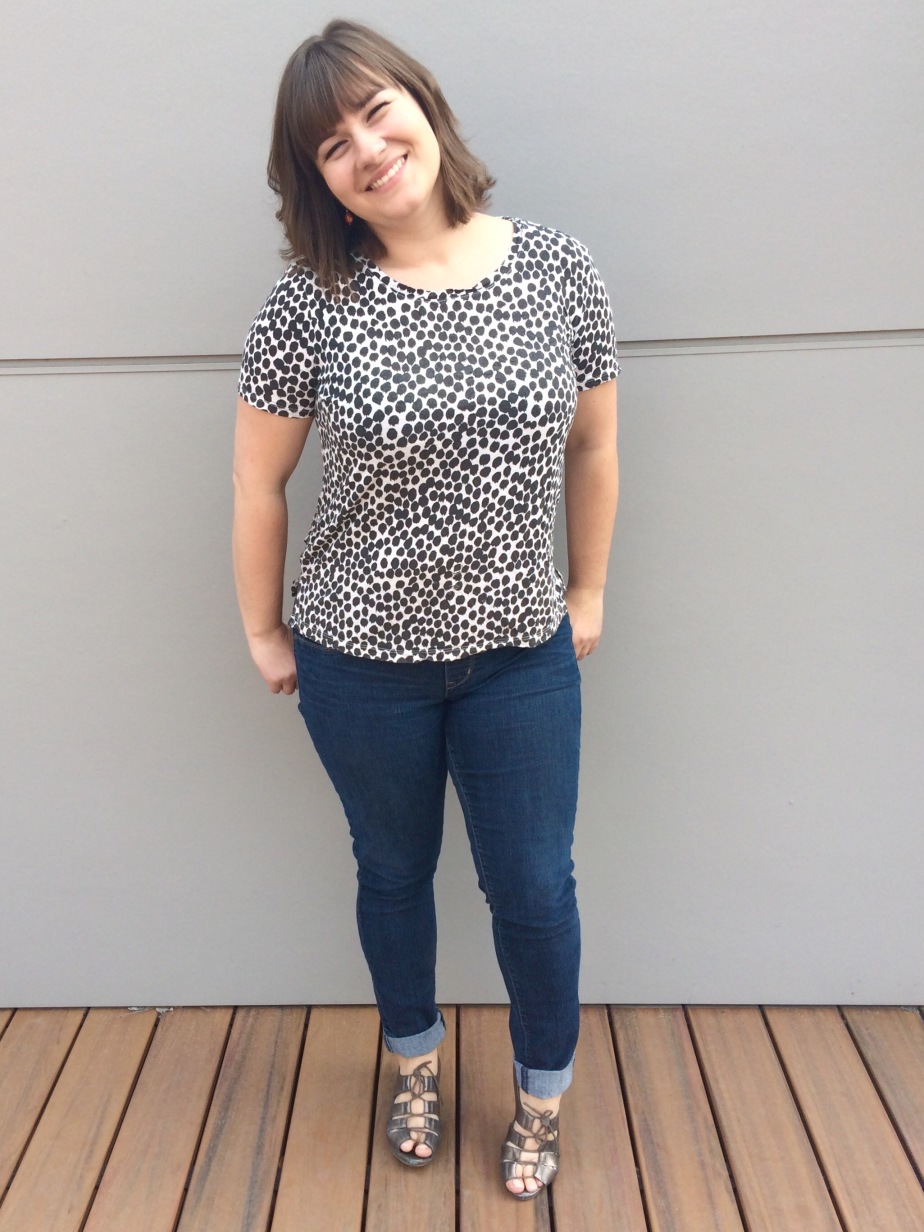 This is the happy smile of a woman with a new haircut.  New hair is the ultimate accessory.  Especially for a woman who struggles to remember to wear earrings.

I love the day after a haircut – my hair still smells amazing, because of the magic potions that the hairstylist puts on my hairs.  It also still has a little bit of styling left, so I don’t even brush it.

Jean and a t-shirt and metallic shoes.  No need to complicate things. 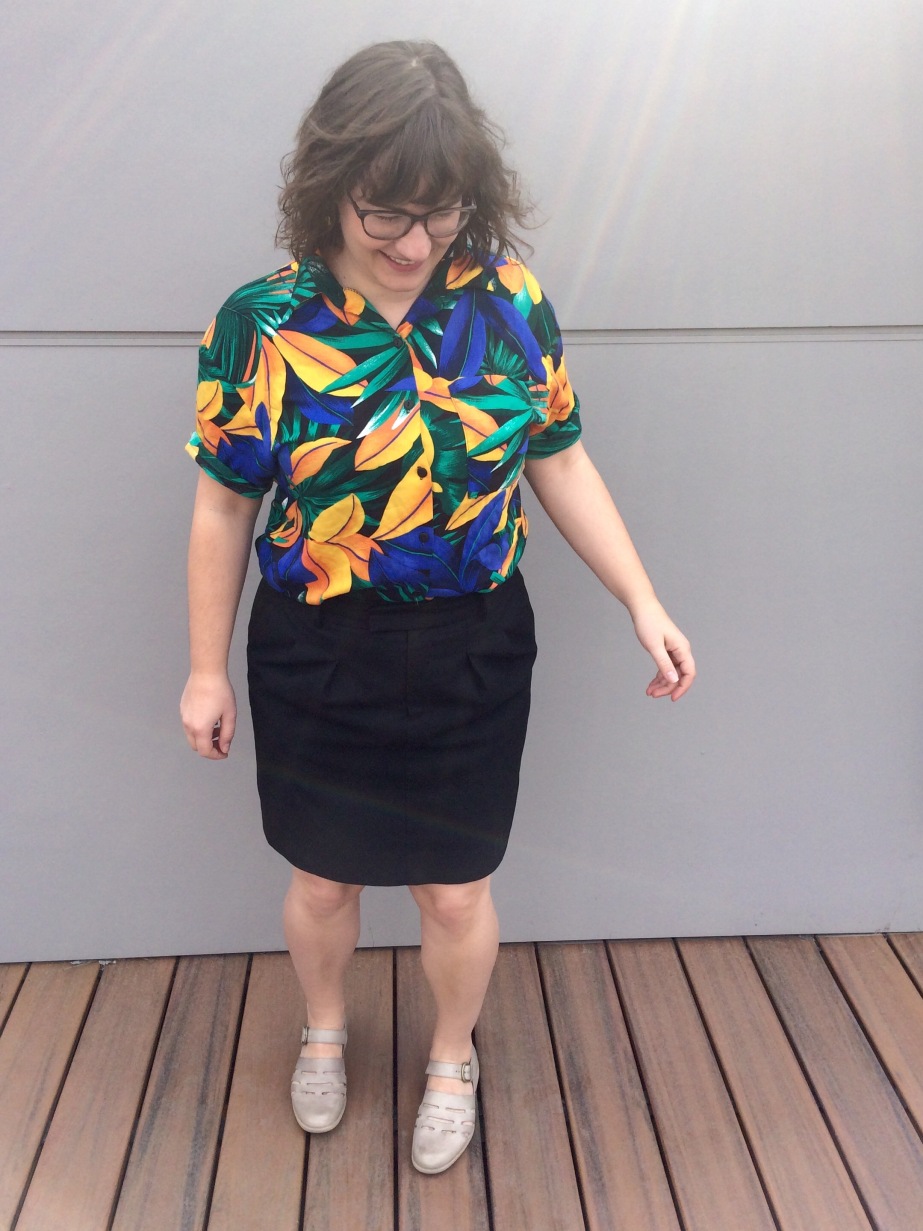 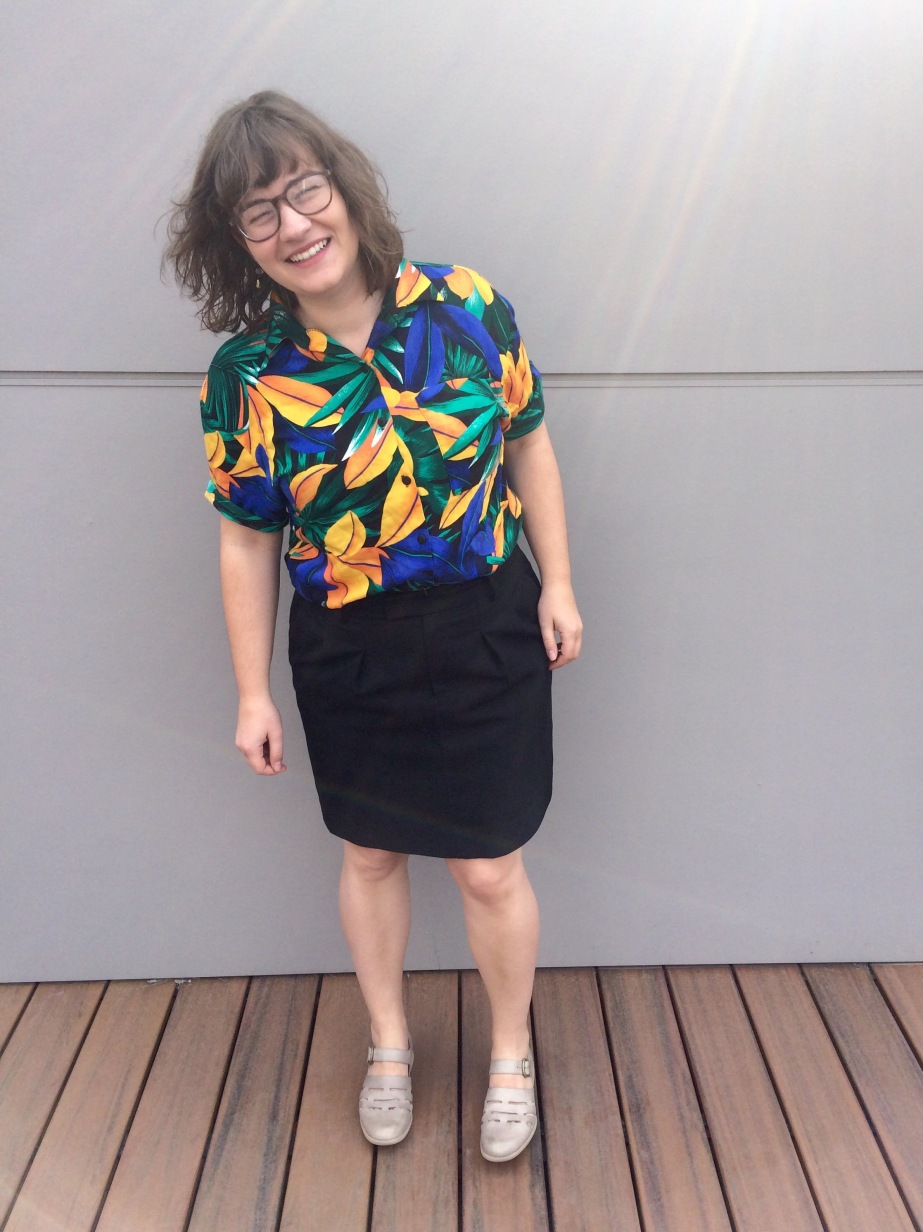 I wanted to see how the hair reacted to air-drying.  The results pleased me – it has a lot of personality and movement.

This outfit is very-much-so Me.  It’s kooky, but still practical.  It’s a mix of a little old lady and little kid.  Really bright, but grounded with neutrals.  It’s an outfit that doesn’t really care about what other people think.  Who doesn’t love a Hawaiian shirt? 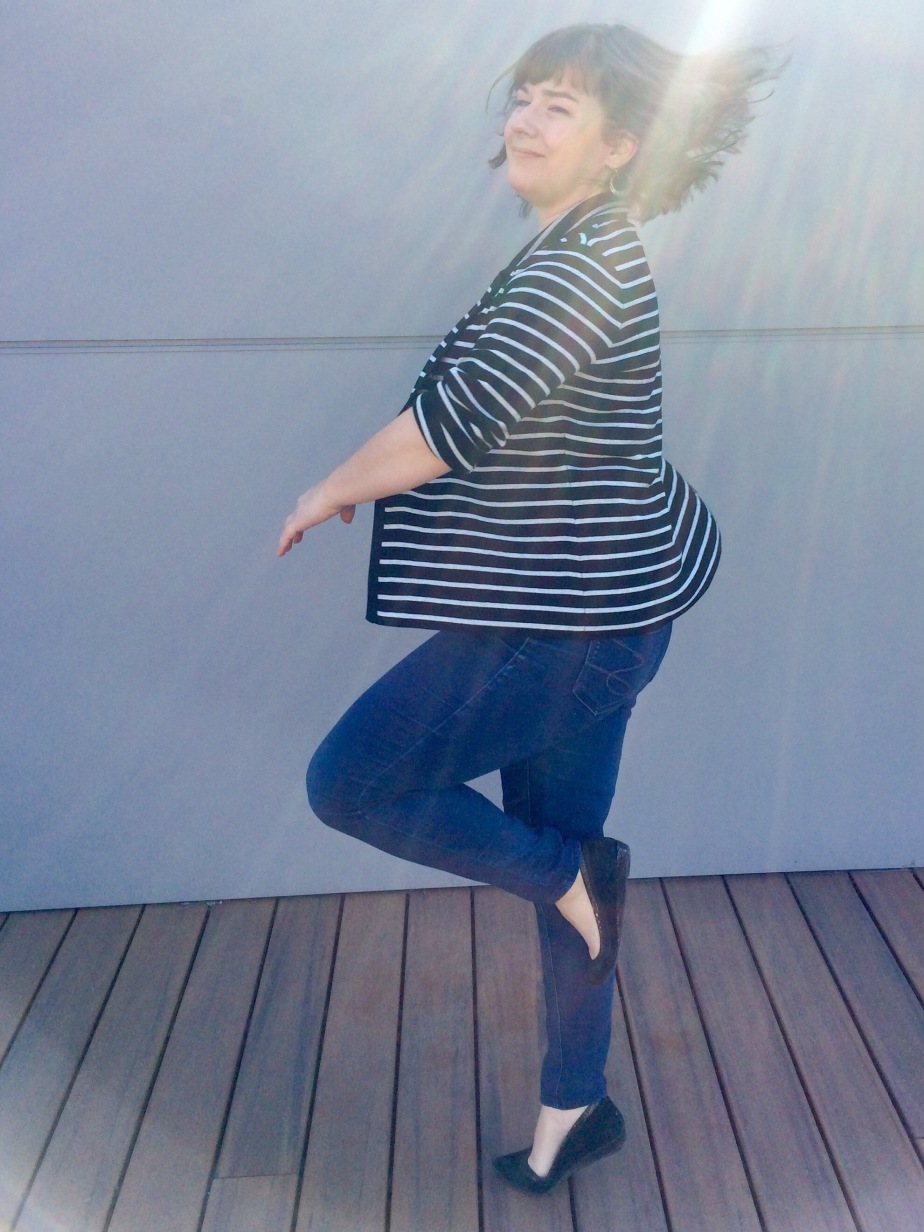 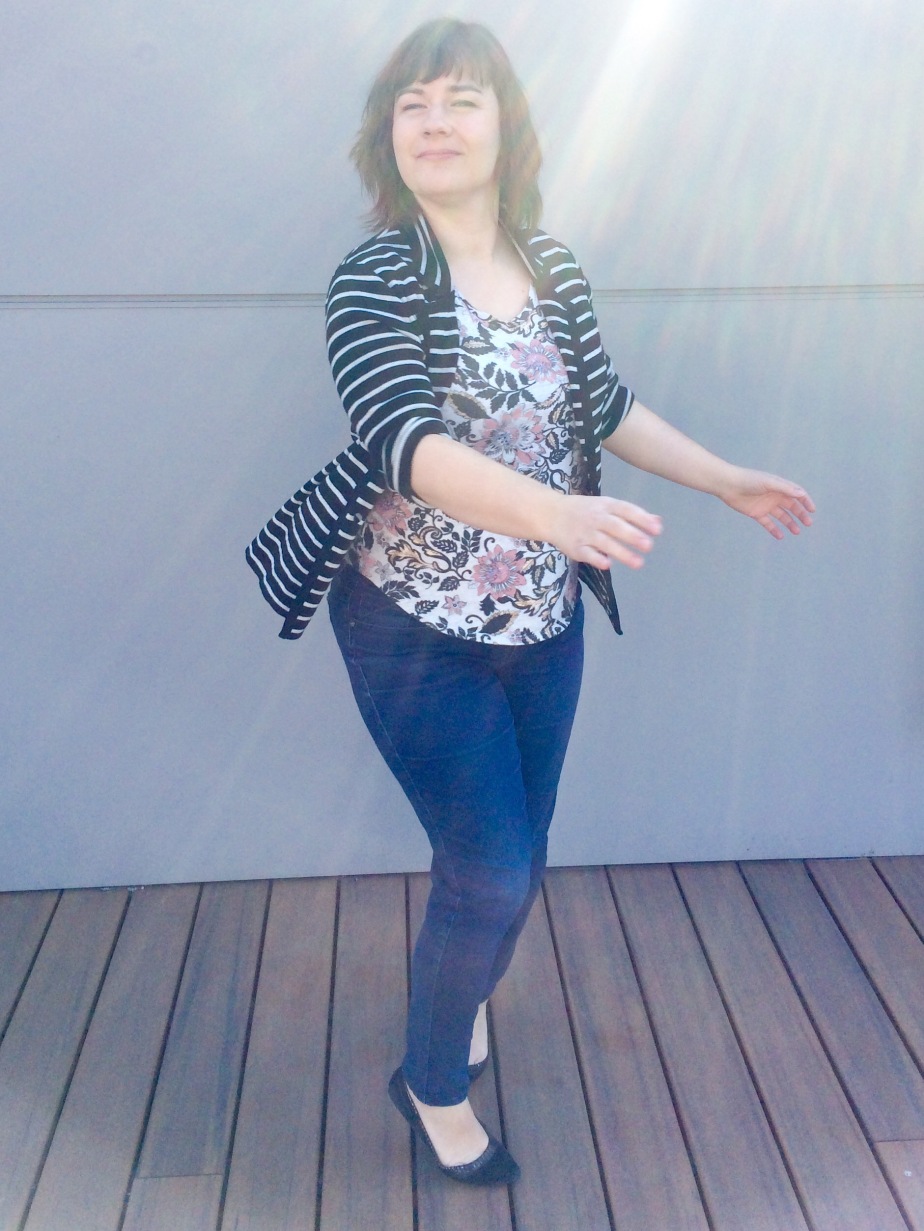 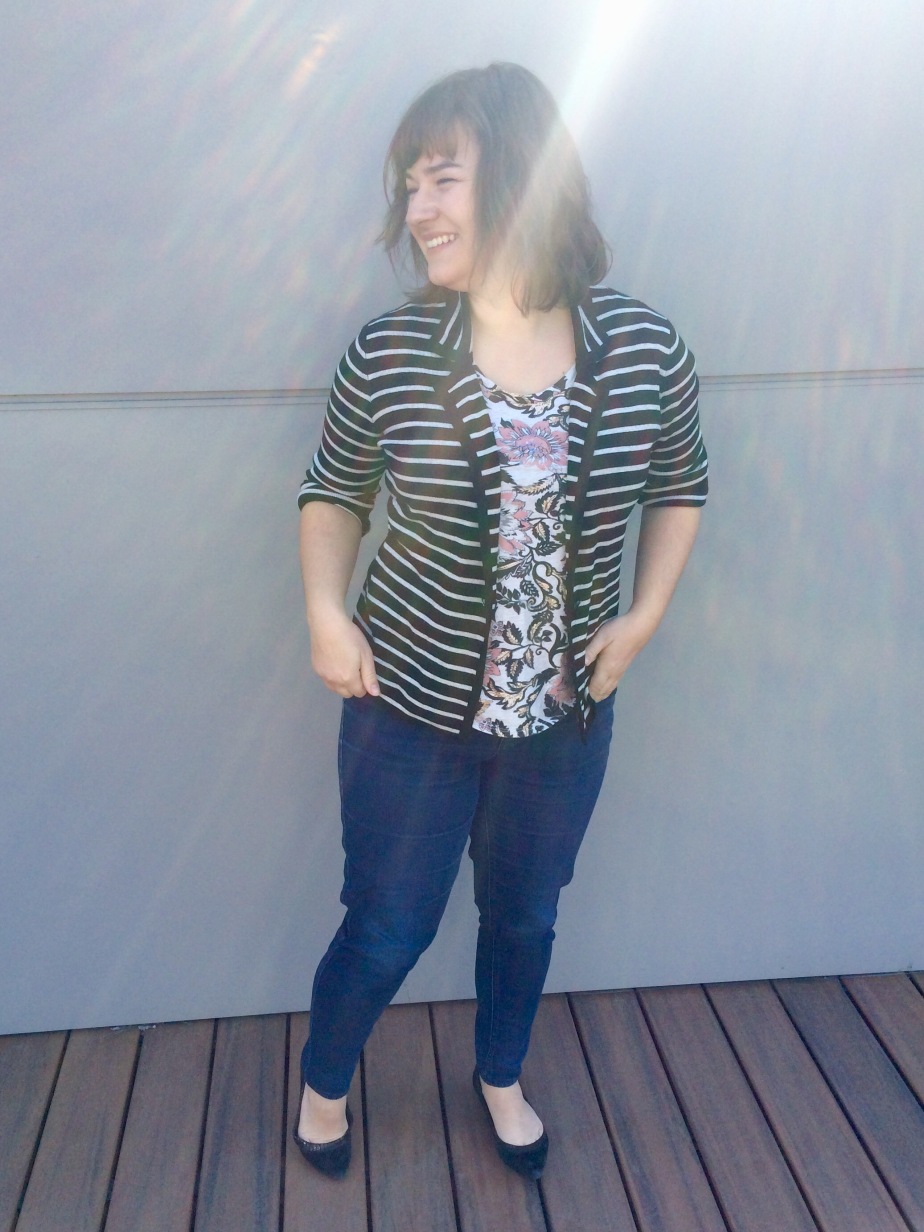 This is my favorite outfit from this week.  I think of it as genteel rock and roll, like those rock songs with random flute, cello, or harpsichord solos in the middle.  Wild Thing comes to mind, as does Stairway to Heaven.

Pattern mixing, skinny jeans, some happy messiness to the hair – that’s all this takes.

I’m off on an adventure next week, because I’m flying to Provence!  I may post next week, but I’ll be gone for a while.  Don’t worry – I’ll tell you all about it when I get back.  See you later, folks!  I’m in the mood to fly away.

One thought on “Ashley Plans to Go Adventuring”